Rise of the SB20 by Nick Rogers

THE RISE OF THE SB20

I’ve been watching the decline of racing on the Derwent River for many years. What has happened to all the different one design classes? Hobart had some big fleet numbers in the past, boats like the Dragon’s, Etchells, Fireball’s, Sharpies, J24’s Derwent class and so on. What has changed?

People just don’t have the time these day with so much happening in their lives, the weekend sailing can be very selfish to family life. Cost of sailing is increasing, the pressure to be competitive is getting harder. What happened to the enjoyment of sailing?

The thing that impressed me with this boat was, it was a pure one design racing boat easy to sail, anybody could sail this boat, it didn’t discriminate against anyone. It was a perfect boat for Hobart. You could even put an outboard motor on the back and have some fun with family and friends or you can store the motor away inside a separate pod in the hull.

The boat sits on a road trailer and is easy to tow, it’s easy to rig and unrig.

The boat is affordable, bullet proof and not expensive to maintain. It’s easy to launch which saves a lot of time when you want to go sailing.

A friend of mine introduced me to the SB20. It was interesting to find out how many boats were already on the mainland. I contacted Rod Jones who was the National Distributor and based in Queensland. I can tell you it didn’t take much convincing for me to purchase a boat. Rod suggested I buy two boats and he would give me the Tasmanian Distributorship.

New SB20 on displayed a the Bellerive Yacht Club Tasmania

It was a challenging time, I was slowly building the numbers and by the end of 2010 I had organized 9 SB20’s to come to Hobart for our local sailors. I knew we had a winner, it definitely was the right boat for Hobart.

Some of the reasons why the boat became so successful was we started racing on a Friday evening, this was a step away from the traditional weekend sailing. It gave back the weekends to enjoy other interests. This worked very well but could be improved. We moved our fleet racing to the Thursday evenings the same time as the traditional twilight racing. Now we’re really on track, this created a lot of interest. We now could show case our fleet to other sailors.

Another big plus in building our fleet was to push the emphasis on performance handicap system, (PHS). This gave everyone the opportunity to win a race, even though we were a one design class it still shared the prizes around giving everyone a chance. It was just fantastic to see the hype and buzz around the club after racing, the close racing produced some tall stories.

Our next push was to get the Nationals in Hobart and in 2012 Hobart was awarded the Nationals. This all came about with the growth of our local fleet. The Nationals opened everyone’s eyes with 21 SB20’s on the start line, racing together on the Derwent. The spectacle of coloured gennakers flying down the runs brought spectators out from all around to watch this incredible class.

Our sailors couldn’t get enough, they were enjoying their racing so much that they wanted more. We decided to add a weekend regatta once a month. This included The Showdown Regatta, The Crown Series and the occasional Sprint Series, we also raced in the winter series. In actual fact we race all year around.

An area I wanted to push was to get more women involved in sailing, I have always been a strong supporter of women sailing and knowing this boat was perfect for women to enjoy sailing.

At first, we only had a small number of women sailing SB20’s but that changed when Graeme Wood came on board. His generosity really made a difference by purchasing 4 SB20’s purely designed to encourage more women to get involved in the sport of sailing.

Then came the Athena Sailing program that has inspired and developed many women in the sport of sailing.

We can’t forget about the youth with The Hutchins School Sailing Academy purchasing 2 SB20’s to add to their training fleet. The youth have been a big part of our class and are very competitive when racing against the bulk of our fleet.

The Derwent Sailing Squadron, Royal Yacht Club of Tasmania and Bellerive Yacht Club went out of their way to help the SB20 class. The marina and boat park upgrades made it so easy to launch and retrieve our boats, the SB20’s were placed in a very visible position where anyone could go and view the boats. All three clubs couldn’t do enough for us.

We have always had a good class association with plenty of input at our meetings, a lot of enthusiastic people have been working very hard behind the scene to make this class what it is today.

We were finally awarded the Worlds for 2018, all the hard work by the SB20 Association, DSS and RYCT finally paid off.

Our local fleet has now grown to a staggering 50 SB20’s, the best fleet of sports boats ever in Tasmania and one of the biggest SB20 local fleets in the World.

We have come a long way, we now have a fantastic competitive Tasmanian fleet that will last us for many years. It would be nice If the other states would follow our path to success. It’s really worth it.

It will be important to keep the interest high and exciting for all our owners and crews in our class of SB20’s. keeping the standard high with interesting and exciting regattas is a must.

The opportunity is open to invite teams from interstate and overseas to compete in our local races, whether it is fleet racing, team racing, match racing or even exhibition short racing. We have good quality boats that we can supply, the options are open for great opportunities.

We have already had international teams from New Caledonia and Singapore here in Hobart.

Being an island state, we have always been disadvantaged, the cost of taking our boats across Bass Strait to compete puts it out of reach for many teams. It’s cheaper to travel from Melbourne to Perth and return than traveling across the most expensive stretch of water in the world, you wouldn’t think this is our National highway.

If only the Tasmanian Government could see the potential for our sailing teams to travel to the mainland (Australia) to be able to race on a level playing field.

Even so we are lucky to have this magnificent fleet of SB20’s racing on our great waterways, we really don’t need to travel, we have a world class fleet on our doorstep.

Tasmania has produced many top quality SB20 sailors and have been so close to winning the worlds.

I can see it won’t be long before we have a SB20 world champion here in Tasmania. I know Tasmania can do it. 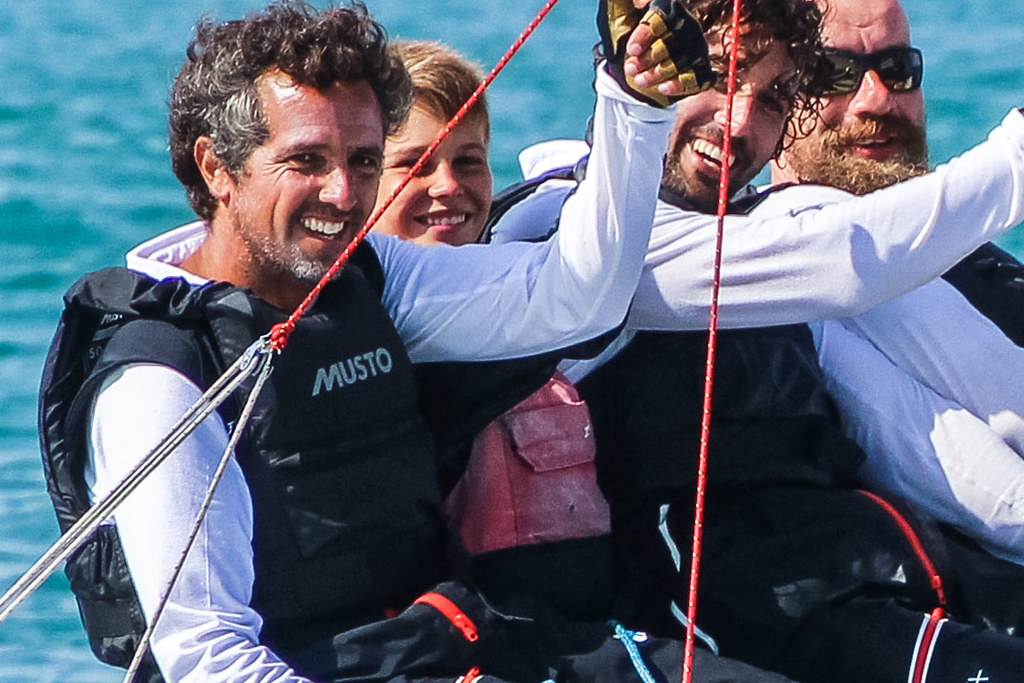